The primary duty of the Criminal Sanctions Agency is to enforce penal sanctions. The main task of the detection dogs is to prevent crime in prisons, especially the entry of illegal or prohibited objects and substances, and function as a type of precaution.

Detection dogs and their handlers at work

Usually, prison detection dogs work together with their handlers in one prison but, occasionally, they can also work in other nearby prisons.The tasks of the dogs include, among others, the inspection of incoming traffic, goods, people, and objects as well as the premises and areas of the prison. In addition, some tasks involve cooperation with other authorities. The work of the dog handlers is highly versatile and independent.

The search for prohibited substances is a game for the dogs and they are rewarded for their finding with praise or a toy. Maintaining the motivation of the dogs is a prerequisite for effective work, which is why the workday also includes exercise and playing with the dog.The dogs have their own place in the prison where they can rest and calm down without external interference.

The handlers take the future prison detection dogs with them in prison already as puppies so that the dogs get used to their future work environment and the sounds and smells of the prison. The actual training to become prison detection dogs and to search for narcotics starts approximately at the age of 12 months at the Police Dog Training Centre. The dogs and their handlers go through the same training as the special police dogs.

The basic dog handler education takes 18 months with the first dog. The handlers are responsible for the training of their dogs themselves. All graduated prison detection dogs must pass a test of skills every year.

At the moment, the Criminal Sanctions Agency has over 20 dogs trained to search for narcotics. Each closed prison has a prison detection dog.

The most common breed is the Labrador retriever but there are some other breeds, too. The working conditions of the prison detection dogs are challenging and the dogs need to have a high level of motivation and stress tolerance. The dogs must be able to work in tight places, sniff large groups of prisoners, and search while being held by the handler without lowering the level of performance. The prison detection dogs’ ability to react has to be good so that they can detect even the mildest scents.

The cooperation between the Criminal Sanctions Agency and the Police Dog Training Centre began in 1920, when the first prison dogs were transferred from the government police dog breeder to the prison services. At that time, the main task of the dogs was guarding and tracking. In 1925, the Prison Department of the Ministry of Justice opened a kennel built for up to 60 dogs next to Helsinki Central Prison. However, the prison services abolished the guard dog system in the 1950s. Following a change in the drug situation in Finland in the 1990s, the Criminal Sanctions Agency decided to return to the use of dogs. The first prison detection dog started in 1997 after which the number of dogs has grown to its current strength.

How to become a dog handler

People who have experience in working in prison and as a prison officer can be selected as dog handlers in the Criminal Sanctions Agency. Experience of dogs is not required but, naturally, it is useful.

The handlers of prison detection dogs need commitment and perseverance as both the dogs and the handlers must practise intensively throughout the dogs’ career. 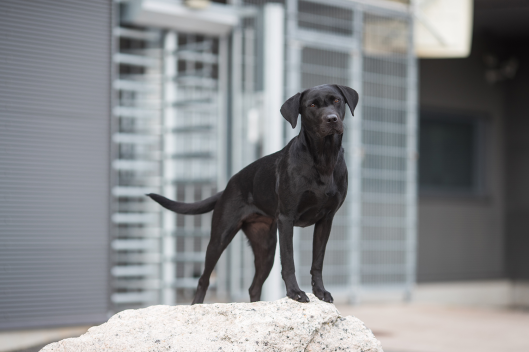