New trends in the 19th century – establishment of Prison Administration Board

When the reform of the Finnish prison administration was started in the 19th century, the main focus was on legislation and prison buildings. The existing prisons needed to be modernized because the prisons of the 1860s dated back to the time when Finland was under Swedish rule. The major transformation of prisons at the end of the 19th century was one of the biggest investments concerning a single administrative branch in Finland. For example Helsinki Prison, which was built in 1881 and is still in use, dates back to that period. 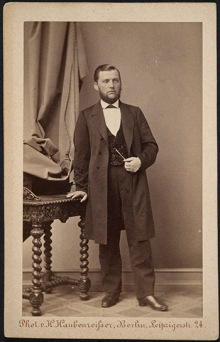 Conflicts and new goals in the early 20th century

The Finnish prison administration faced major changes in the 1910s. Contrasts between different staff groups lead to open conflicts during the civil war and its aftermath. Changes in the political situation impeded the work of the Prison Administration Board and, therefore, prevented the top management from fully concentrating on the internal matters of the prison services. The chief director of the Prison Administration Board changed frequently at the beginning of the 20th century. 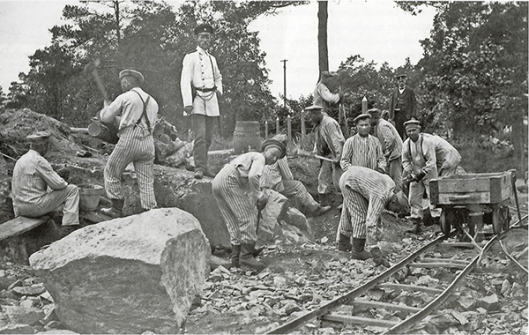 Prisoners working in Helsinki at the beginning of the 20th century. (Photo: from a book Vaasan linna 1863–2013 ja suomalaista vankeinhoitoa 1700-luvulta nykypäivään)

Alexis Gripenberg, who followed Grotenfelt as chief director of the Prison Administration Board, was removed from office in 1901 due to his strong opposition to Russification but was reinstated in 1906. In the intervening time, the post was given to Harald Dieckhoff. Gripenberg had to give up office again in 1911 during a new period of Russification. After him, Arthur Brofeldt served as chief director for a short time but the following two chief directors were Russian officials: Paul Strauch was appointed in 1914 and Nikolai Stromiloff in 1915. Stromiloff was ejected from office two years later as a result of the first Russian Revolution. At that time, lawyer Väinö Hakkila was appointed as chief director mainly on political grounds. He had to resign from the office after the war in 1918. The following chief director of the Prison Administration Board was Bruno Breitholtz.

The period of changes in the 1910s was characterized by attempts to set new goals for the prison services. Director of Helsinki Central Prison Johan Waldemar Castrén pushed the establishment of prison labour colonies in order to expand work activities and, eventually, convinced the decision-makers of the financial and prison-related benefits of outdoor work in the countryside. 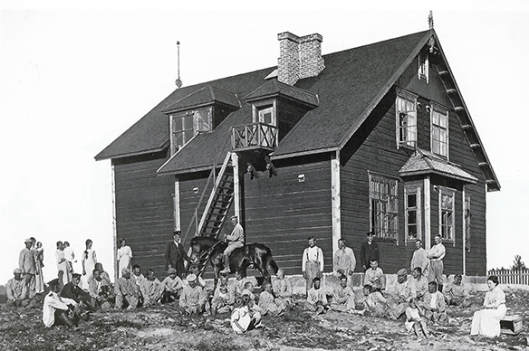 Financial savings and the simplification of the public office systems led to the abolishment of the Prison Administration Board in 1922. The successor to the Board was the Department of Prison Administration at the Ministry of Justice, which was established on 1 January 1923. In January 1933, the name of the department was changed to the Prison Department of the Ministry of Justice.

The development of prison work activities continued in the 1920s and 1930s with a focus on agriculture and clearing land for cultivation. The substantial increase in the number of prisoners put pressure on the development of work activities. In 1934, a committee established to develop prison work activities proposed that prison work should be arranged so that it benefits the state but does not harm private entrepreneurship. The committee recommended that agricultural work and especially the clearing of mires for settlement purposes should be increased. For that purpose, four subsidiary prisons were established without delay. 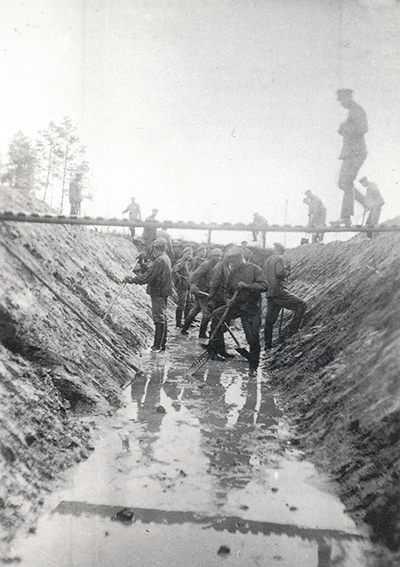 Wartime and its aftermath

At the beginning of 1937, the Prison Department was changed to Prison Administration Bureau that operated under the Ministry of Justice with extensive independent authority. The objective behind the reform was to shorten handling times and enable more flexible decision-making. The most significant change was the removal of the minister’s discretionary power, which gave the management of the Prison Administration Bureau an exceptionally extensive power of decision. That eased the handling of matters under the special circumstances caused by the Second World War but, at the same time, left the supervision of the activities to the officials of the bureau. As there was no outside control, problems were not addressed efficiently enough and the legal protection of prisoners was endangered during the war. The war had a significant impact on the operation of prisons. The number of prisoners increased and the shortage of food supplies as well as the prison staff being enlisted in the military service hindered the arrangement of prison work activities. 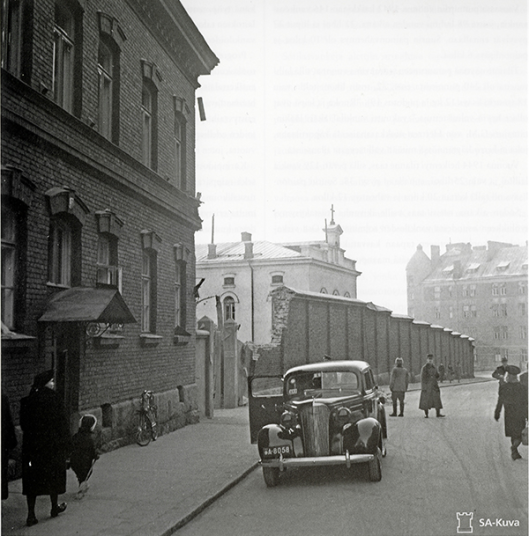 The wall of Helsinki Provincial Prison was damaged during an air raid in November 1942. (Photo: from a book Vaasan linna 1863–2013 ja suomalaista vankeinhoitoa 1700-luvulta nykypäivään)

After the war, the Prison Administration Bureau received extensive public attention as former political prisoners criticized the prison conditions and many malpractices were revealed. Armas Arvelo, who had been the chief director of the Prison Administration Bureau since 1920, resigned from the office in 1945 because of heavy criticism concerning the prison services. He was replaced by Karl Soine (Englund until 1910), who was appointed as senior ministerial adviser heading the Prison Department of the Ministry of Justice and as chief director of the Prison Service. At the same time, retiring staff members caused a major generational change in the central administration.

At the end of the 1940s, the operation of prisons normalized quickly. Work activities still focused on agriculture but large cultivation and forest areas assigned to meet the needs of evacuees diminished the relevance of work activities. A new labour colony system for short-term first-time sentenced and fine default prisoners was introduced in 1946. In addition, the Finnish Prison Association arranged work camps for homeless and unemployed prisoners after their release. A vocational school for young offenders was established in Riihimäki Central Prison and it was funded by a donation made by Petter Forsström. Young female prisoners were offered education in Järvenpää Prison Ward, which was part of Kerava Juvenile Prison. The training of prison staff was also improved after war. 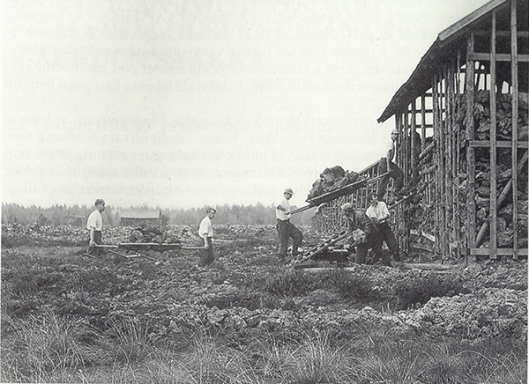 The fierce post-war criticism concerning the prison services set the planning of an overall reform of the prison administration in motion. In February 1950, a decree to abolish the Prison Administration Bureau was issued and, on 1 April, its successor started its operation – it was, in fact, the former Prison Department, which was more closely part of the Ministry of Justice. After the 1950s, the volume of changes in the prison organization dropped.

A degree for prison officials included in the curriculum of the School of Social Sciences in 1949 was abolished in 1955 when the Prison Administration was entrusted with the arrangement of the courses and started providing education in the facilities of Helsinki Central Prison. The Prison Personnel Training Centre established in 1976 advanced the education significantly. Its task was to arrange prison officer and principal officer courses, education required in the prison service degree and the prison director degree as well as further and in-service training. In the autumn 1986, a basic degree in prison services was included in the curriculum of the Training Centre.

The prison work activities faced a major change in the 1960s to the 1980s when agriculture started to give way to the production structures and population trends of society. At the same time, the share of production work and handicrafts increased. Chief Director Karl Soine retired in 1969 and was succeeded by Karl Lång who was appointed as senior ministerial adviser who operated as chief director of the Prison Service of the Ministry of Justice on 1 January 1970. Lång retired in 1998 when Markku Salminen took office.

Cooperation with the Probation Association

The duties of the Prison Department established in the Ministry of Justice in 1950 included the management of the aftercare of prisoners in cooperation with the Probation Association. The origins of the Probation Association also dated back to the 19th century. Its predecessor the Finnish Prison Association, which started actual probation work in Finland, was established by procurator Eugen von Knorring in 1870. The goal of the association, which operated on a voluntary basis, was to help released prisoners to find work, accommodation and livelihood as well as to promote moral education in prisons. At first, the association had no official status but, as from the 1920s, it was more clearly integrated into the sphere of operations of the authorities responsible for the judicial administration and prison services. In the 1930s, the association was tasked with supervising conditionally released prisoners and, in the 1940s, organizing work camps for released prisoners. In 1966, the name of the association was changed to Registered Association of Probation. In 1975, the organization of probation work as subject to public law was approved and the Probation Association was established under the administrative branch of the Ministry of Justice.